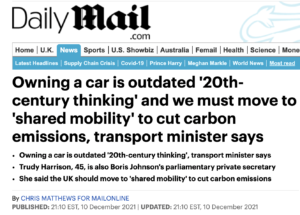 Owning a car is outdated ’20th-century thinking’, transport minister says – Trudy Harrison, 45, is also Boris Johnson’s parliamentary private secretary – She said the UK should move to ‘shared mobility’ to cut carbon emissions
#
Marc Morano: “You were warned! Don’t be surprised when the climate agenda is successful in taking away private car ownership and use. They have literally been talking about this since the 1970s and now with the success of COVID lockdowns, they see a real possibility of success.”
Flashback: Dem presidential candidate Andrew Yang: Climate Change May Require Elimination of Car Ownership – Suggests ‘constant roving fleet of electric cars’– “We might not own our own cars.”
UK funded 2019 report ‘Absolute Zero’ urged climate lockdowns: ‘Stop flying…no new roads, airport closures…stop eating beef & lamb…stop doing anything that causes emissions’ – Regulate CO2 similar to ‘asbestos’

https://www.dailymail.co.uk/news/article-10298487/Owning-car-outdated-20th-century-thinking-transport-minister-Trudy-Harrison-says.html
By CHRIS MATTHEWS FOR MAILONLINE

Owning a car could become a fad of the past, a government minister claimed this week.
Junior transport minister Trudy Harrison, 45, told a sustainability conference owning a car was outdated ’20th-century thinking’ and the country should move to ‘shared mobility’ to cut carbon emissions.
Almost 80 per cent of households in the UK own a car according to figures by Statista for 2020.
That accounts for 63.5 million households owning at least one car out of a total 80.7 million.
Ms Harrison, who is also parliamentary private secretary to Boris Johnson, said the UK was ‘reaching a tipping point where shared mobility in the form of car clubs, scooters and bike shares will soon be a realistic option for many of us to get around.’
She told a virtual audience at shared transport charity CoMoUK what the country needed was a move away from ’20th-century thinking centred around private vehicle ownership and towards greater flexibility, with personal choice and low carbon shared transport’.
‘Changing the way people consider car ownership and dependency will take time,’ Ms Harrison said.
Yet she added: ‘Many things seem far fetched until they aren’t and I believe the same is true for shared mobility.
Cars are responsible for approximately 13 per cent of Britain’s greenhouse gas emissions.
The Conservatives said they would reduce emissions to net zero by 2050 and have committed £5 billion to ‘greener’ transport such as walking and cycling.
One way of achieving this is by the banning of new petrol and diesel cars from 2030.
E-scooters are also expected to be made legal on UK roads to promote a greener way of getting about.
#
You Were Warned!
Flashback: Dem presidential candidate Andrew Yang: Climate Change May Require Elimination of Car Ownership – Suggests ‘constant roving fleet of electric cars’– “We might not own our own cars.”
UK funded 2019 report ‘Absolute Zero’ urged climate lockdowns: ‘Stop flying…no new roads, airport closures…stop eating beef & lamb…stop doing anything that causes emissions’ – Regulate CO2 similar to ‘asbestos’

April 2021: Climate lockdowns have arrived: France to ban domestic flights where trains are available, in move to cut emissions

May 2021: Climate lockdowns!? New International Energy Agency’s ‘Net-Zero’ report urges ‘behavioral changes’ to fight climate: ‘A shift away from private car use…. upper speed limits’ & thermostat controls; limits on hot water & more!
October 2021:Climate Lockdowns: British Medical Journal Study Calls For Meat & Dairy Price Hikes To Fight ‘Climate Change’ – Meat consumption in N. America must fall 79% – ‘Substantially fewer journeys by car
’Obama EPA’s Real Motive?! Flashback 1975: Obama Science Czar John Holdren warned U.S. ‘threatened’ by ‘the hazards of too much energy’ – Flashback 1975: Obama Science Czar John Holdren Said Real Threat to USA Is Cheap Energy: ‘The U.S. is threatened far more by the hazards of too much energy, too soon, than by the hazards of too little energy, too late.’ Holdren laments the masses driving to the store to get beer! Holdren: “In a society that uses its 5,000-pound automobiles for half-mile round trips to the market to fetch a six-pack of beer, consumes the beer in buildings that are overcooled in summer and overheated in winter, and then throws the aluminum cans away at an energy loss equivalent to a third of a gallon of gasoline per six-pack, this ‘primitive existence’ argument strikes me as the most offensive kind of nonsense.”
Out: COVID lockdowns. In: Climate lockdowns – ‘There could be a ban on ‘nonessential travel’ with hefty fines’– “Is it really such a stretch to think that a lockdown could be imposed (once again crashing the economy) to drastically cut emissions while we await the widespread availability of ‘affordable’ electric cars and charging stations? And even if it’s not something as drastic as a total lockdown, there could be a ban on ‘nonessential travel’ with hefty fines for driving anywhere except to your job, the grocery store or the doctor’s office. From there you can easily imagine an order limiting the sale or purchase of red meats or other unapproved foods.
June 2020: ‘Scientists’ warning on affluence’: Study: Wealth harms the planet! Solutions? ‘Degrowth’; ‘Eco-socialism’; Banning ‘oversized vehicles’; ‘Eco-feminism’; ‘Maximum income levels’
Prepare for the Coming ‘Climate Lockdowns’ – ‘Govts would limit private-vehicle use, ban consumption of red meat, & impose extreme energy-saving measures…stop drilling’– “Under a ‘climate lockdown,’ governments would limit private-vehicle use, ban consumption of red meat, and impose extreme energy-saving measures, while fossil-fuel companies would have to stop drilling,” writes Mariana Mazzucato, a professor at the Economics of Innovation and Public Value Center at University College London, in a paper titled “Avoiding a Climate Lockdown.”  The title of her paper is very misleading. She believes climate lockdowns will be necessary unless we “overhaul our economic structures and do capitalism differently.”

WATCH LIVE: THOUSANDS Turn Out For President Trump’s First Save America Rally Of 2022 In Florence, Arizona